Firstly apologies for the recent silence it's been all go since arriving in Australia I've not had a moment to write a post, but finally I have some time to share with you about how my Science Communication event went during my trip.

For those of you who don't know Popup Science is a new science communication event that Seirian Sumner, Chris Wyatt and myself started in Bristol to bring scientists out of their labs and offices and onto the streets to 'popup' and engage with the public about their research.

This year Seirian and I took Popup Science with us to our conference (the International Union for the Study of Social Insect) that we were attending in Cairns. Along with our Cairns event co-organiser Tanya Latty from the University of Sydney we ran an afternoon of Popup Science on the Esplanade on the 16th of July. 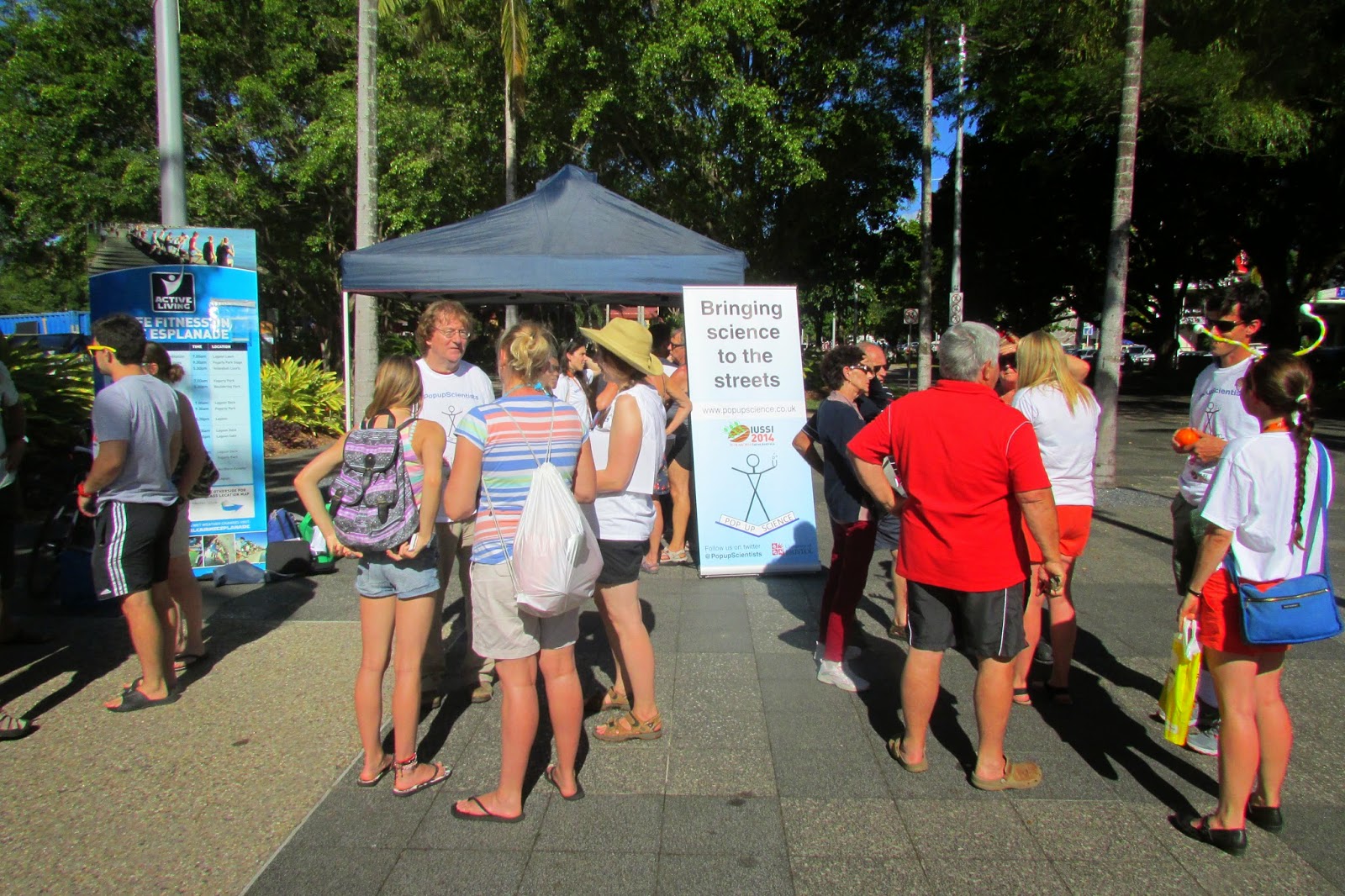 We had a wonderful team of international scientists from the conference joining us for the event who were brilliant at drawing in a crowd. Although all of our topics were social insect based we covered so many different areas of their fascinating biology.

Seirian and I (University of Bristol) found a local Cairns paper wasp nest to explain why we love our model species and about how much we can learn about social evolution from them. Some friendly rivalry to team wasp arrived with Paul Eggleton (NHM London) who was persuading the public why he believes termites are so much more interesting than wasps.

The University of Sydney team brought along with them specimens of many of the bees species the group works with in both Australia and around the world as well as some discussion on social slime moulds. The bees were also represented from one of the conferences plenary speakers Jay Evans (USDA-ARD Bee Research Lab) who was addressing how different genetic approaches could be used in helping to mitigate the current declines in bee populations.

Chris Smith (Earham College) was constantly surrounded by the public, getting them to lick the local green weaver ant species, which is completely edible, and gives a nice citrus kick on ones tongue.

More fascinating ants facts about how ants smell and use chemical communication came from our team at the University of Helsinki.


Over the course of 4 hours we spoke to hundreds of people from holiday makers to school groups sharing all of our passion for science with them. Seirian, Tanya and myself would like to thank everyone who took part in our Cairn's Popup Science event and for making it such a successful and fun afternoon. 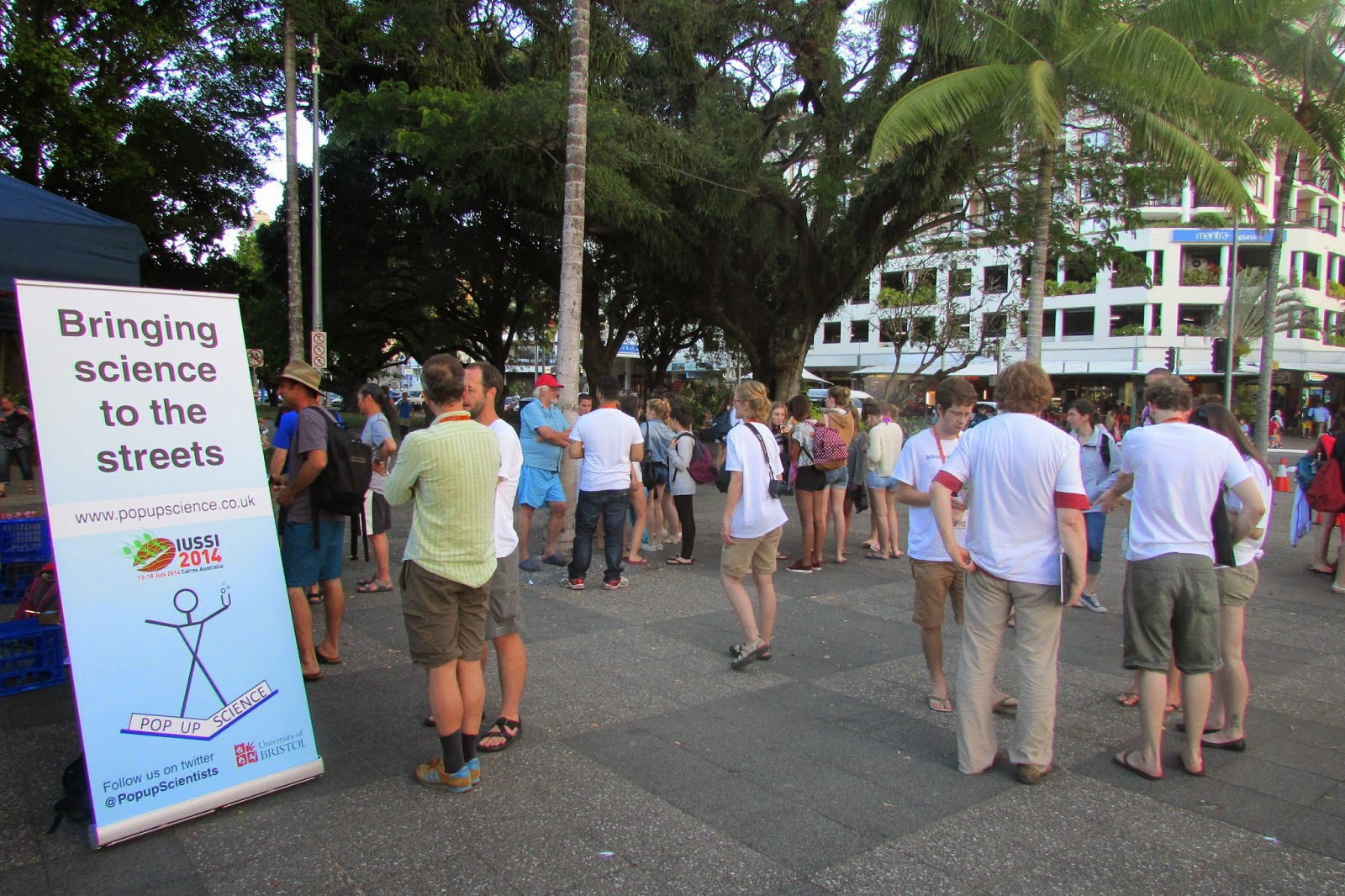 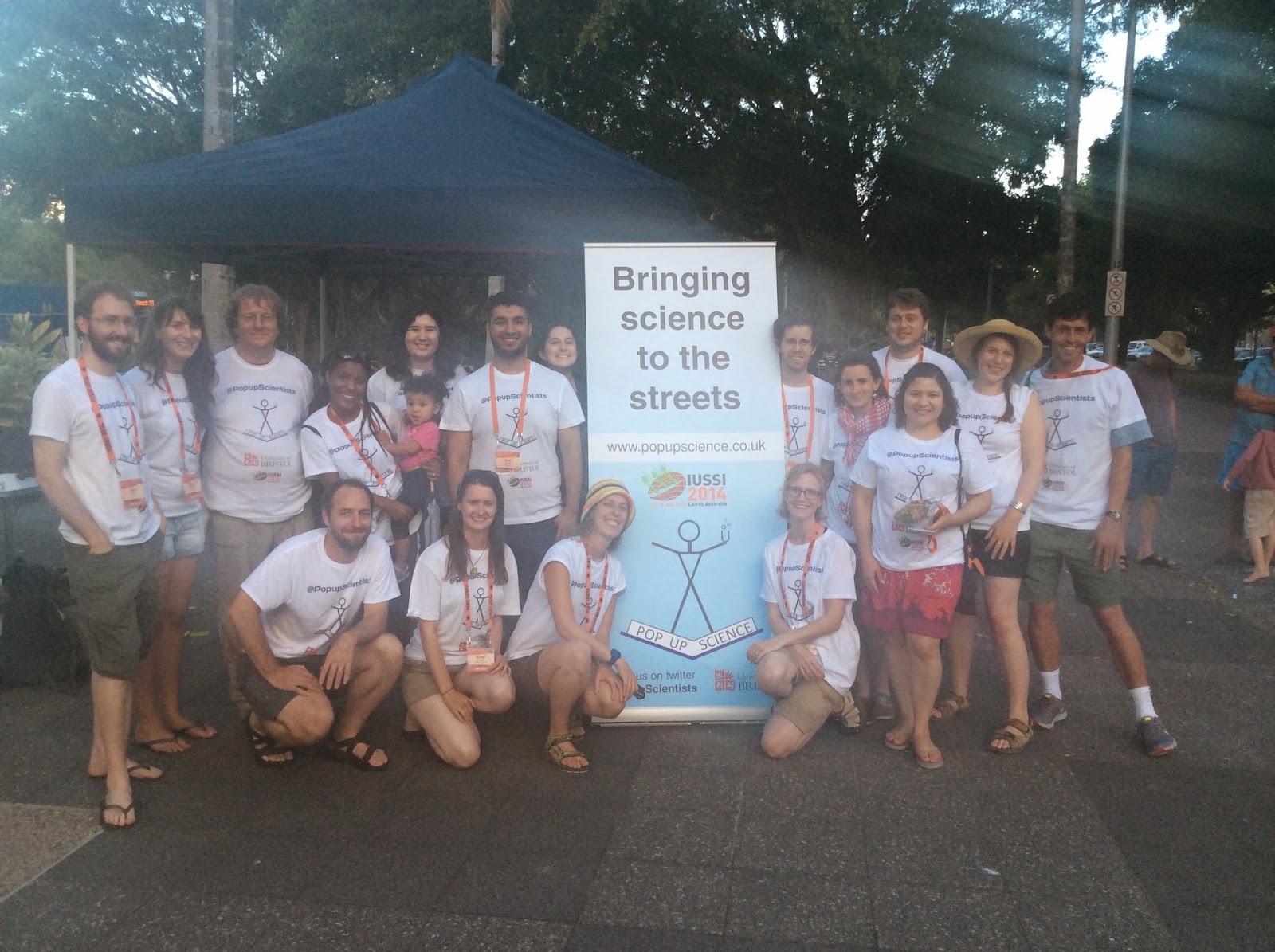 Soapbox Science Bristol and nearly a Zoologist Abroad once more Well its been nearly a year since my last post on A Zoologist Abroad and for a good reason - I've not been fortune to venture off to exciting parts of the world with work since then.

But... that is all about to change. This week I am off to Australia to attend my first international conference - the International Union of the Study of Social Insects 2014. I will be presenting a poster and a talk about some of the work I have been conducting during my PhD. Whilst at the conference I will be reporting back on the goings of at this event as well sharing with you some great zoological photos and information I found out during my visit to the land down under.

Before I leave though I wanted share with you all a few photos from an event I took part in a few weeks ago - Soapbox Science Bristol. Soapbox Science is a science communication event which gets some of the UK's most talented female scientists onto Soapboxes to engage with the public about their work whilst also promoting the role of women in science. 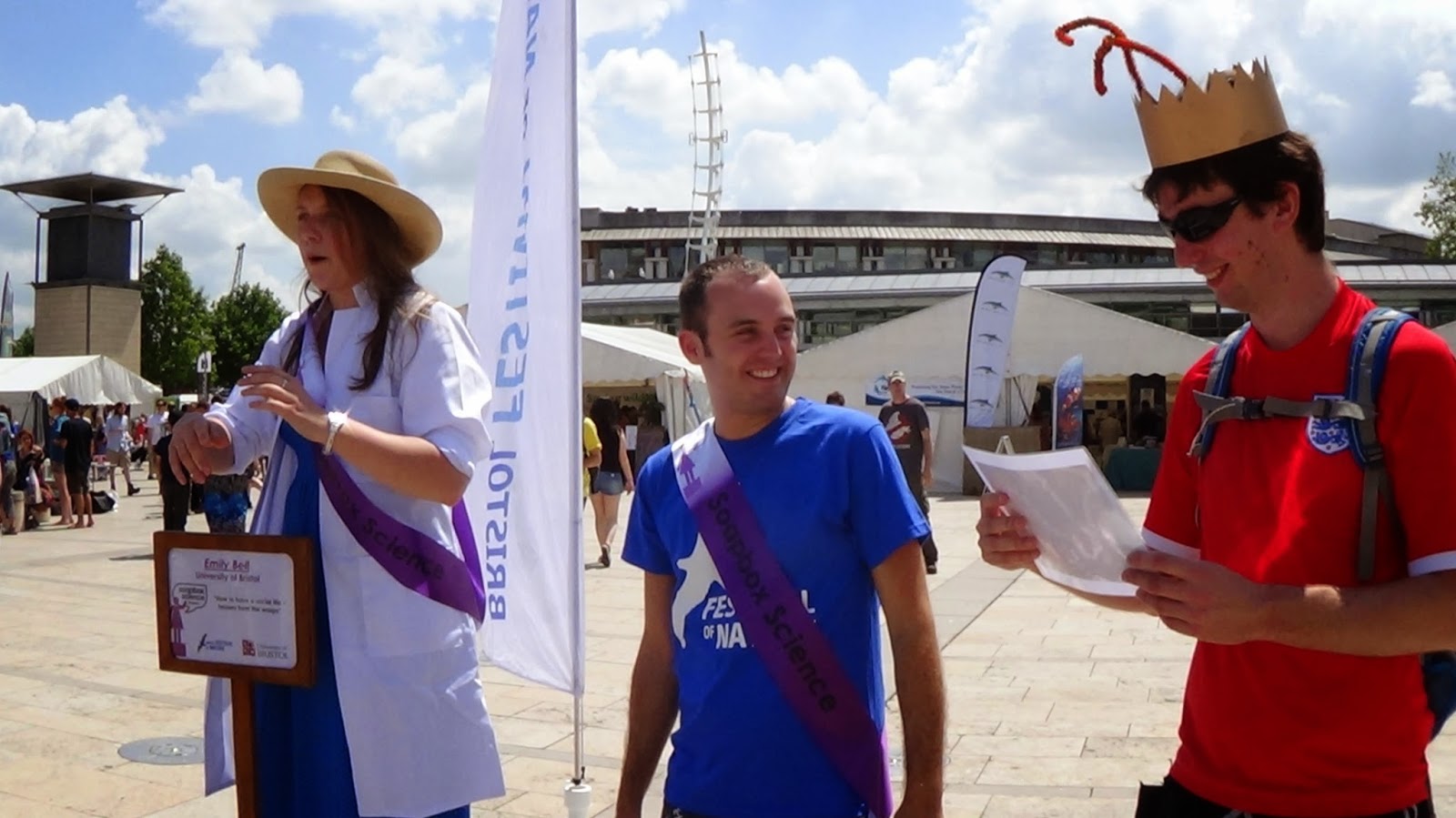 I must admit just before getting up on my soapbox my stomach was turning circles and I thought "what have I let myself in for" but the second I got up there are started talk about 'How to have a social life - lessons from the wasp' it was a real buzz and the hour just disappeared. My aim was to try and get people to think a little differently about wasps - they are not just creatures who sting and annoy us while sipping a pint at the pub or enjoying a picnic, but vital parts of every ecosystem. They pollinate plants, fantastic predators at removing agricultural pests - not only that but they have an amazing social life that we as humans can learn so much from. Apparently, two young teenagers were heard to leave the soapbox arena saying "wow, wasps are cool" - soapbox challenge completed!

So watch this space for the continuing adventures of a Zoologist Abroad once more. 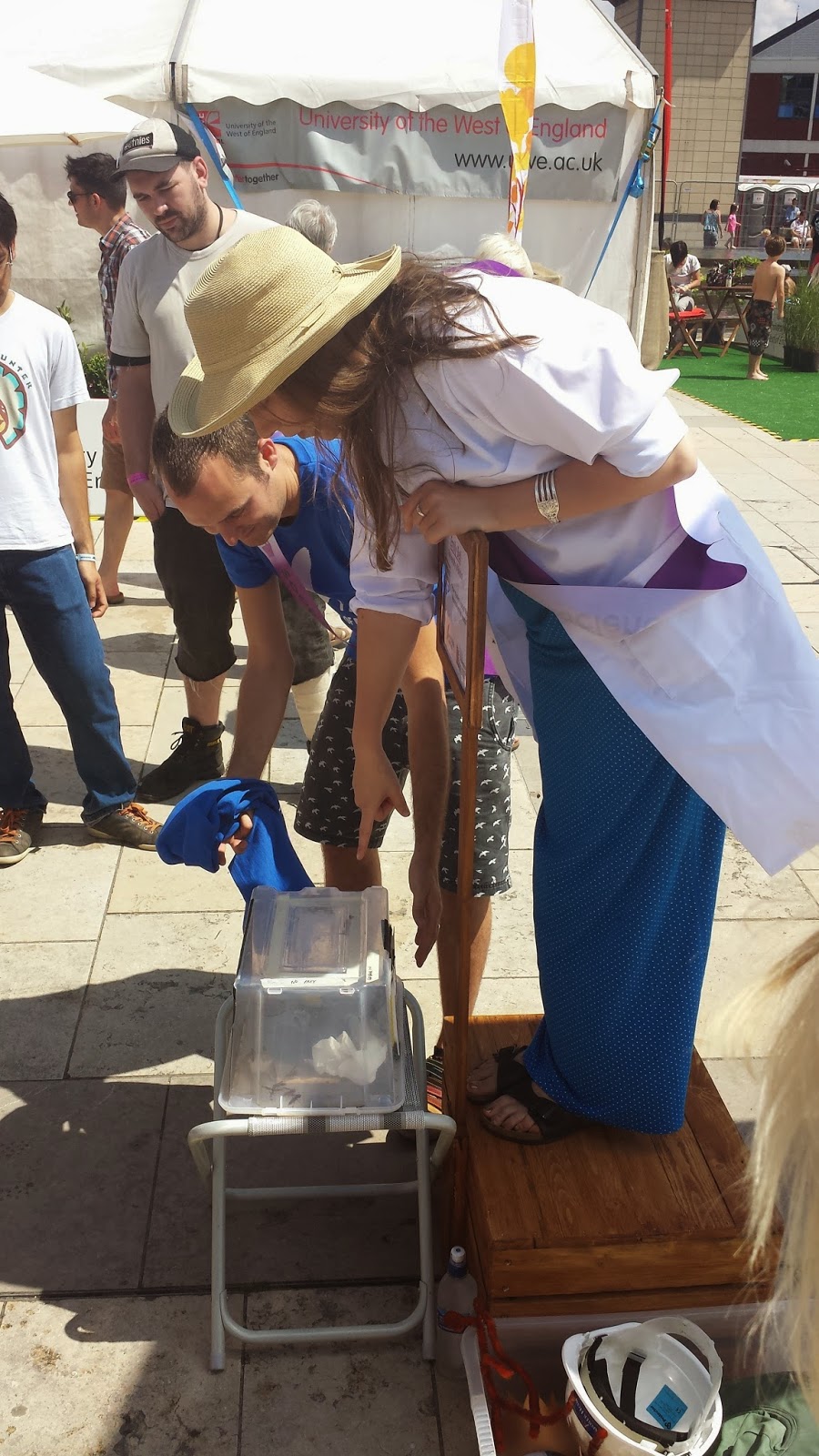 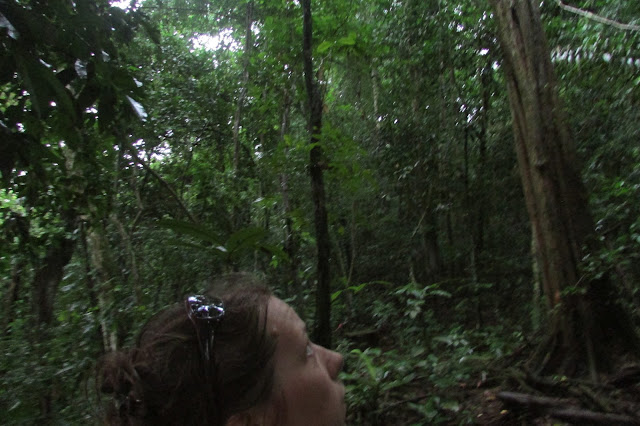 Well the start of August has seen an end to my field work in Panama and my safe return with all my wasps to the UK. So this will be my final post for a little while and I just wanted to share with you a few photographs from our last few days in Panama.

For our penultimate day we went back to Barro Colorado Island for a final wander around this beautiful island in the middle of the canal. It really is such a special place to visit filled with researchers from all over the world studying nearly every living thing that is found there. As normal in the rainforest is filled with so many amazing animals and plants surround you at every turn of the path but they manage to disappear into the canopy before I managed to get the following sneaky snaps.

Last year you may remember a photograph I took of me standing at the base of the largest and possibly oldest tree on BCI known fondly as "Big Tree". During our time in STRI this year we heard some sad news that something awful happened to Big Tree and the tree died and the canopy fell covering the forest floor and creating a giant clearing. It was a bit of shock to reach the end of the trail and find this! 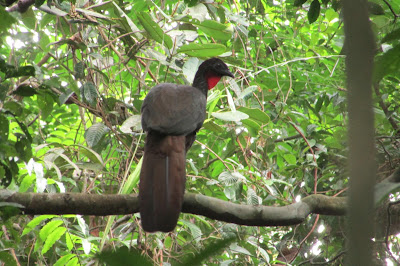